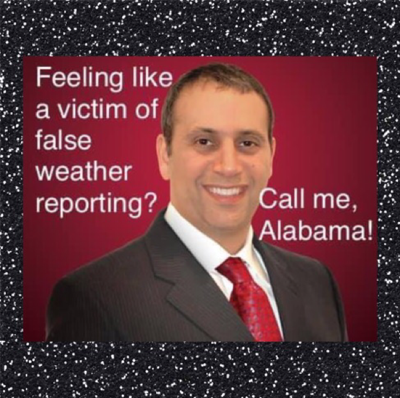 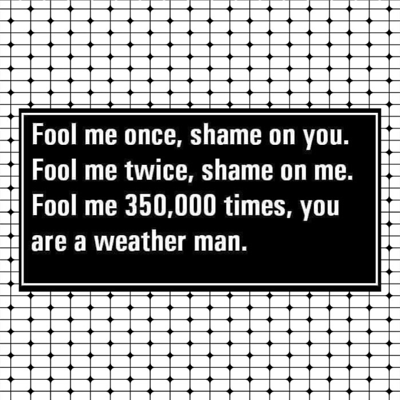 I tell people, “ it’s the only job, where you can be wrong multiple times, still have a job and get paid”!

I can confirm the inaccuracy of weather forecasts multiple times.
A few days back, it said "plenty of sunshine" but was overcast the whole day. Several times in past years, they predicted fair weather but we had 30 hours of rain - a rainfield the size of Montana.
Imagine a heart surgeon with that kind of record.
If you want to earn money but are bad at your job, become a weatherman.
I know weather isn't climate, but if they can't predict the weather for just 24 hours, how can they expect to predict the climate for decades?

Good point on that last sentence! Never thought of it that way!

What I can’t get over is my apps that tell me there is a 30% chance of rain when it is POURING DOWN! How can it not know that it’s 100% raining?!

Exactly! I have the AccuWeather platinum paid app and it's still wrong, even their "minutecast" 2 hour forecast is often wrong.
What they do get right is temperatures but not precipitation.
Maybe look out the window to check if it's raining 😂

I don’t understand that.....it looks like temps would be harder than rain....I mean....you can SEE rain! LOL

Shows Alexander Shunnarah, who is an Alabama lawyer who has billboards all over the state, trying to drum up business. He’s become quite a joke in AL.

Feeling like a victim of false weather reporting? Call me, Alabama!

FYI: For those that don’t know about it, we were supposed to get snow in AL this week. Several school systems called off school and we didn’t even get flurries.